For decades, David Koch has been an underground sheep herder in the city of Edmonton, Canada.

On 3.5 acres of land, the flock of 50 sheep grazed quietly on David Koch’s property and over at the neighbours yard to help keep their grass short. Sometimes, one of them would go rogue and escape, but for the last 20 years the sheep made barely enough “peep” to attract any attention.

That’s when David Koch came under the attention of city officials who caught wind of the sheep activities and because anything that weighs over 10 kilograms is considered livestock, the city dweller has some explaining to do as they’re not allowed within city limits.

Koch, 44, and a computer programmer by trade, has been living on the property in the Ellersie area since the 1960s when his family first moved in. He became an accidental farmer, first getting a couple of sheep in the 1990s with his brother to keep the grass trimmed.

Since then the flock has grown. In the winter he sold lambs and sometimes curious children would get rewarded when Koch brought out the whole flock for them to see.

Now the animal control officers, who discovered the sheep by accident, have told Koch that he has to get rid of the sheep by Sept. 20.

According to Edmonton bylaws, only land zoned for agricultural purposes in the city are allowed to have livestocks.

“People don’t want farms right next to them,” Keith Scott, the city’s animal control co-ordinator, said to Global News Edmonton. “We don’t usually get a lot of complaints about noise. Nobody’s saying there’s too much mooing going on.

Scott said the city receives multiple complaints each year about “livestock at large” — usually hens or farm animals that have escaped from rural areas and wandered into the city.

Koch said no one has yet complained to him about his sheep. In fact, sometimes strangers ring his doorbell and ask to pet them and pose with them. 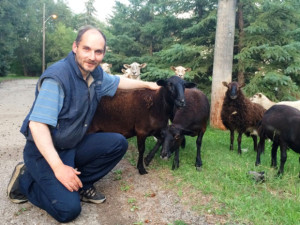 Sheep are not the only animals that have lived in his yard near Ellerslie Road over the years. Since the 1960s, when his family first bought the property, it has been home to cows, chickens, llamas, goats, rabbits and pigs.

“I know all my neighbours and there are very few people in this world who can say that. They all love to see the sheep

Several llamas escaped once and the pigs gave him grief — “They were monsters that climbed over everything,” he says — but the sheep have always been a success.

“The intention is not to go in and throw a bunch of fines on him,” Scott said. “If he needs help, we can make sure the animals are rehoused. He needs to make sure he is compliant with the bylaw.”

Koch said his answering machine has already been flooded with messages from people (farmers, mostly) begging to take the sheep off his hands.

“Most of these guys could become food for other people,” he said reluctantly.

He’s not yet ready to say goodbye to his sheep, some of whom have names, including Sniper, Pail Tipper and Moocher.

“They all have their little personalities,” he said. “They all love me.”