The flooding in Texas created a huge toll on humans and on animals but for 64 critters at least, they’re getting a fresh start in San Diego after Southwest Airlines donated a retired plane to transport them to a new home. 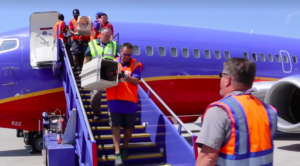 The animals were relocated from Houston shelters to allow OPA to make room for families’ displaced pets.

A total of 64 animals boarded a retiring -300 aircraft and flew from Austin to San Diego. Because the aircraft was set to retire in Victorville, staff didn’t have to worry about deep-cleaning the aircraft after this incredibly furry, and somewhat stinky, animal rescue flight. 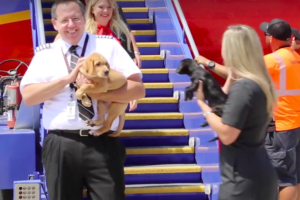 The animal rescue flight was a team operation. Network Operations routed the aircraft; Ground Operations determined the special weight and balances; regulations were followed to keep the furry passengers safe. The airline’s Austin station coordinated special TSA clearances, carefully loaded the cargo on board, and secured the crates in the seats. 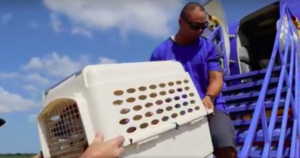 Flight crew then got everyone safely to San Diego and soothed the animals in the air. Finally the San Diego team swiftly coordinated the arrival and met the animals off the plane with vans for transportation to Helen Woodward Animal Center.

This was Southwest’s second animal relief flight working alongside Helen Woodward Animal Center to transport shelter animals out of areas devastated by natural disasters. In 2012, Southwest was able to transport more than 40 animals from Newark to San Diego after Hurricane Sandy.

The shelter animals displaced by Hurricane Harvey will remain under the care of Helen Woodward Animal Center in San Diego and will be available for adoption in the following weeks.