George H.W. Bush, the 41st president of the United States has just passed away but his dog, a service dog name Sully, is staying guard over his former owner.

In a heartbreaking IG post Sunday, the official account for Sully H.W. Bush had a simple phrase to mark the passing. Mission Complete.

Sully was named after former airline pilot Chesley “Sully” Sullenberger III, who became famous for landing a damaged passenger jet on the Hudson River in 2009.

Sully, a 2-year-old yellow Labrador Retriever, was specifically matched to provide support and companionship to Mr. Bush in his daily activities and was gifted to him by America’s VetDogs just last June.

He was to the former president through VetDogs’ relationship with President Bush and Clinton via the Walter Reed National Military Medical Center in Bethesda, MD.

Sully the dog was raised and trained through the VetDogs prison puppy program, in which inmates raise future service dogs until the dog is about 15 months old. Inmate handlers begin working with puppies on housebreaking, obedience, standardized commands, and teaching the three foundations of service dog tasks: retrieve, tug, and push – all part of the VetDogs training curriculum.

Just five days ago, in his second last post before the president’s passing, Sully H.W. Bush posted he wanted to hang some Christmas decorations. 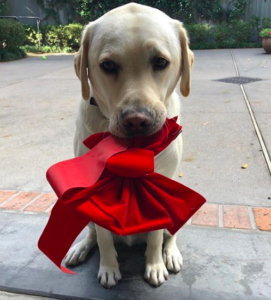 Once a dog returns back VetDogs’ Smithtown campus, training begins and specific tasks are fine-tuned and refined for an individual’s particular needs.

America’s VetDogs trains and places guide dogs for individuals who are blind or have low vision; hearing dogs for those who have lost their hearing later in life; service dogs for those with other physical disabilities; physical and occupational therapy dogs to aid in the rehabilitation process in military and VA hospitals, and PTSD service dogs to help mitigate the effects of post-traumatic stress disorder.

America’s VetDogs service dogs can be trained to do many tasks. They include retrieving items as small as a credit card to an object as large as a dropped support cane, opening and closing doors, waking their handler from a nightmare, getting help or pushing an emergency button, bracing and supporting their handler when standing or walking up and down stairs, and many more.

It costs more than $50,000 to breed, raise, train, and place one assistance dog; however, all of VetDogs’ services are provided at no charge to the individual.