San Jose police have arrested a 24-year-old man sleeping in his vehicle by a dead cat.

Police began investigating after the theft of a domesticated orange tabby cat name Gogo two weeks ago outside a home.

The surveillance video shows an unknown white male lured a cat towards him, then grabbed the cat and ran away holding the cat.

Detectives from the San Jose Police Departments Assaults Unit followed up on this information and identified a possible suspect.

On Thursday at approximately 6:30 A.M., San Jose Police located and arrested 24 year old Robert Farmer while he was sleeping in his vehicle in the area of Hillsdale Avenue and Leigh Avenue in San Jose. 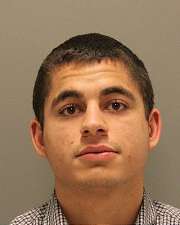 A search of suspect Farmer’s vehicle revealed a deceased cat concealed within the vehicle. In a statement, police said they’re still looking for the cat’s owner.

San Jose Police have not confirmed the identity of the deceased cat or its owner. At this time we do not know if the suspect Farmer is responsible for the other missing/deceased cats reported to the San Jose Police Department.

Suspect Farmer will be booked into the Santa Clara County Jail for one count of Felony Animal Cruelty and other misdemeanor offenses.