Sphen and Magic are in love.

They also happen to be male Gentoo penguins residing at the Sea Life Sydney Aquarium, which calls the well-dressed same-sex couple Sphengic. And right now, they are getting ready to have a baby.

“Sphen and Magic began developing a strong bond and became inseparable before breeding season, and are constantly seen waddling around and going for swims together in the Penguin Expedition,” the aquarium explained.

How do they know?

They are feathering the nest.

“As breeding season fast approached, the couple started collecting ‘pebbles’ to create a nest in their spot, and now have more pebbles than any other couple!” the facility continued. “Gentoo parents keep their eggs warm on pebble nesting rings scattered throughout the Macquarie Island exhibit. Swapping duties daily, while one of the parents are doing their best to incubate the egg, the other is patrolling the perimeters of the nest, warding off any potential pebble thieves or over-inquisitive neighbours.”

Nobody wanted Magic and Sphen to be left out.

So, they were given a “dummy egg” to allow them to practice incubating and develop their parenting skills.

“They were absolute naturals and displayed great care for their egg, so much so, the team at Sea Life Sydney fostered a real egg to them from another couple who had two,” the facility added.

Sphen is older and excellent at incubating the egg, their keepers said. Magic is still mastering the job.

“The pair make a great team, and there are often days where the egg can not be seen,” officials said, “which is really good for penguin breeding!” 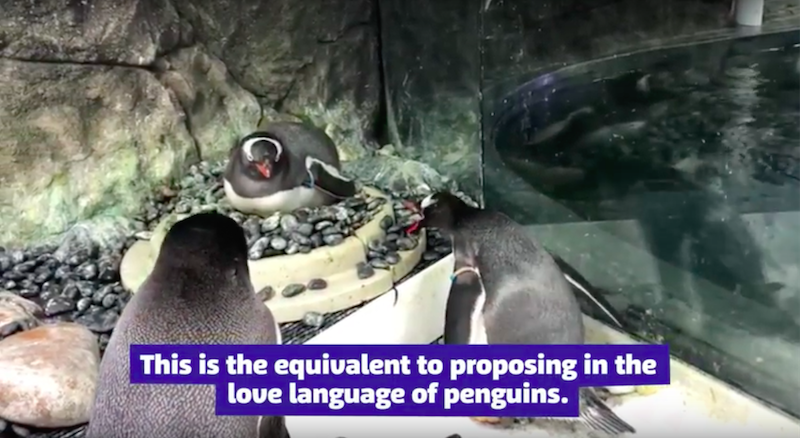 The aquarium has been keeping people posted under the hashtag #LOVEWINS.

Because, it really does.