Kermeeeee!!! as Miss Piggy would say. 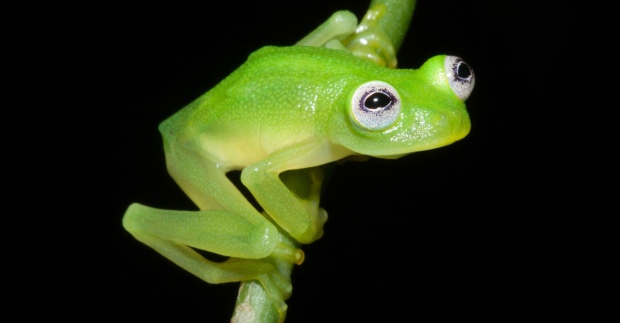 This find was made by Brian Kubicki

We would like to share the exciting news about a newly discovered and described species of glassfrog, Hyalinobatrachium dianae, from the Caribbean slopes of Costa Rica. The authors (Brian Kubicki, Stanley Salazar, and Robert Puschendorf) distinguished H. dianae from other glassfrogs due to its unique combination of morphological characteristics, advertisement call, and genetic distance. This new species was described from six specimens collected at three different sites along the Caribbean slopes of Costa Rica between 400 to 900 meters above sea level. Hyalinobatrachium dianae was named in honor of the senior author’s mother Janet Diane Kubicki. With the addition of H. dianae, Costa Rica is known to have 14 glassfrogs inhabiting its tiny national territory! The last time a new glassfrog was described from Costa Rica was back in 1973.

In the real life version of H.dianae the skin is so see-through you can see the organs. In Kermit, you only get green felt.