In 1925, a deadly diptheria epidemic swept through the town of Nome, Alaska and quickly spread to all the children in  the town.

The lone physician and four nurses in Nome faced a crisis too terrible to imagine—an outbreak of diphtheria that could kill most of the region’s population of about 10,000 people.

The only hope for them was an anti-toxin. Unfortunately, due to extreme winter conditions it was impossible for any airplanes or ships to get to Nome and bring them the anti-toxin. 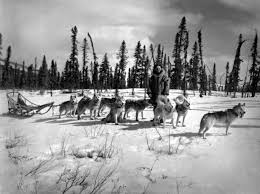 When everything seemed to be lost, a solution takes shape: to transport the anti-toxin using a relay of dog sled teams.

But under the pressure of time and long distance this seemed rather an impossible mission.

More than 20 mushers and their dog sled teams participated at the relay.

Diphtheria is a highly contagious upper respiratory tract illness caused by the toxin-producing bacterium Corynebacterium diphtheriea. The disease can be treated with an antitoxin or prevented by vaccines.

However, before these medicines were available, diphtheria was commonly known as the “strangling angel of children.” Diphtheria causes the throat to become blocked with a thick, leathery coating that makes breathing very difficult. Without treatment, death by suffocation is very likely, especially for young children.

In December 1924, Nome doctor Curtis Welch watched as an outbreak started—with cases first thought to be simple sore throats or tonsillitis. In January 1925, when 2 children died of diphtheria, the impending crisis became clear. Dr. Welch ordered a quarantine, but diphtheria is so contagious that many people were likely already exposed and he knew more cases would appear. 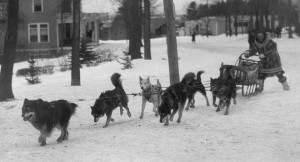 Help from Miles Away

On January 22, 1925, Dr. Welch sent dozens of telegrams pleading for help to find and deliver antitoxin. National leaders in Washington, D.C., helped to locate the closest large supply of diphtheria antitoxin—it was in Anchorage, hundreds of miles away.

The next problem was figuring out the fastest way get the antitoxin to Nome. There were no roads or railways to Nome, air service was unavailable, and ships could not reach the town because of sea ice around Nome. The only way in was overland via the Iditarod Trail, also known as the Seward-to-Nome Mail Trail. This crisis made newspaper and radio headlines across America.

Norwegian immigrant Gunnar Kaasen was the musher on the dog team that successfully delivered diphtheria antitoxin to Nome, Alaska in 1925.

After weighing all possible solutions, Alaska’s Territorial Governor Scott Bone approved a relay of the 20 best mail carrier mushers (sled dog drivers) and 150 dogs along the 674-mile Nenana-to-Nome Trail, a trip that usually took 15 to 20 days.

Package of antitoxin picked up by team of mushers

On January 27, one of the story’s heroes, “Wild” Bill Shannon, picked up the package of antitoxin at the nearest station that could be reached by train and began the journey. Teams of mushers traveled day and night, enduring blizzards and temperatures of 50 degrees below zero, handing off the package to fresh teams. Leonhard Seppala’s team with lead dog, Togo, covered 91 miles —the most dangerous part of the relay — and Gunner Kaasen’s team and lead dog, Balto, finished the lifesaving race, reaching Nome on February 2.

Record time for race of mercy

This Great Race of Mercy was completed in a record 5 days and 7 hours.

The solution to the crisis also became the founding of an event well known today—the Iditarod Trail Sled Dog Race.

Balto, Togo and Fritz were three of the 150 dogs that took part at that race, facing blinding blizzards and temperatures that dropped to as low as -50 °C (-60 F) in order to deliver the package containing the life saving serum. 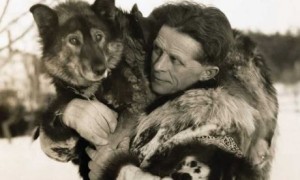 The most dangerous part of the race was covered by Seppala and his leader dog Togo; they also covered the longest distance: 418 km.

The last part of the journey to Nome was covered by Kaasen and his sled dog Balto.

By that time the arctic blizzard got so severe that Kaasen could not even see his leading dog and feared they would not be able to deliver the anti-toxin in time. But his dog Balto knew the trail well and, following his instincts, led the team through the snow.

Each dog on a team has an important role, but it is the leader dog who must have an uncanny instinct to find the trail, sense any danger and guide the team through safely.

It was a life-or-death race to deliver the desperately needed anti-toxin and the dogs traveled 1085 kilometers in less than 6 days, most of it in the dark. When the dogs arrived at Nome they were so exhausted that could not even bark.

Had it not been for the brave dogs to deliver the serum, the children wouldn’t have survived. 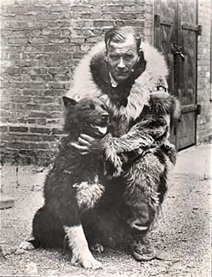 After the mission’s success Balto and his team became famous and a bronze statue of Balto was unveiled in his honor in Central Park, New York.

But fame didn’t last long…Balto and the other dogs from his team were sold to a vaudeville promoter and ended up chained and exhibited in “dime” shows, unhealthy and mistreated.

Impressed by their drama and outraged by the horrible conditions they were being kept in, a businessman finally managed to save Balto and 6 other dogs from his team. But it is not certain what happened with the rest of the dogs, for whom salvation might have come just too late.

Following their deaths, three of the Nome Serum Race dogs – Balto, Togo and Fritz – were mounted by a taxidermist and put on display in museums. We don’t know the reasons why people at that time felt it right to have the three dogs stuffed, probably they wanted to keep their memory alive in a very tangible way, but our personal opinion is that they could have given them some dignity and bury them so that they could finally rest their old tired bodies.

It was a team effort, each of the 150 dogs having its vital part in delivering the life saving antitoxin and Balto, the dog who led the final sprint, became a symbol of courage, tenacity and hope.
These dogs have proved to humanity that there is hope even when everything seems to be lost.

It’s now humanity’s turn to prove that there is hope for dogs too.

Save a life. Adopt a dog