Steve Verschoor of Anthem, Arizona is being hailed as a “dog hero” for saving a German Shepherd from being attacked by a rabid bobcat.

Verschoor is now dealing with multiple injuries, including lacerations on both arms. He also has a broken hand and is on a round of treatment to deal with rabies. 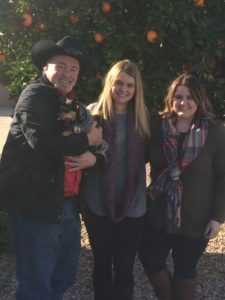 The attack was caught on video by a neighbour in Anthem, reposted on Facebook, and it shows Verschoor jumping out of his car to help wrangle the wild bobcat away from the dog. At one point he has to swing the bobcat to get it to loosen its grip on the dog.

Verschoor is being hailed by his daughter Brittany as a “fur baby” lover who has two rescue dogs at home, including a three-legged one.

He has always said you need to stand up for those who can’t for themselves,” says Brittany.

So that morning when he saw a dog getting attacked by a bob cat he had to be dumb and heroic and step in. He says if the roles were flipped and it was one of our dogs he would want someone to step in as well to help.

My sister Katlin Nicole and I have been raised by dad that animals are apart of the family and you wouldn’t turn your head if a child was getting attacked so why turn your head for an animal.

The cat was found and killed and results shows it has rabies. Verschoor now has to get shots and is facing severe viral infections.

The family says it can’t find a doctor to administer the shots so has to go to the hospital ER every four days to get them done. They’re making an appeal for donations at a GoFundMe page.

Being in Oregon away from my dad has been hard enough and not being by his side now is even harder. My dad would never ask for help which is why I am doing what I can to make sure he’s okay. He’s my best friend and I just want to see him healthy again and not worry about medical expenses and focus on getting better.

Any remaining proceeds will go to a local animal rescue.