Take a 30-second, slightly out-of-focus, one-shot and even you can make it big on YouTube. As long as the subject of your home movie is the most adorable kitten to ever grace the face of Mother Earth.

Someone who goes by the handle Steel Giant uploaded this cinematic masterpiece yesterday titled “A tiny petting addict.” (It’s also titled something in what appears to be Russian, but Google translate doesn’t exactly pump out anything that makes sense.)

This internet gem already has more than 830,000 clicks. It features a mini grey-black kitten and a left hand. For 32 seconds. That is all.

Hundreds of people have already posted comments to the future Oscar-winner. And by that I mean, it will never win an Oscar.

“My heart is bursting from all this cuteness,” notes Grizzled.

“I’ve watched this video 28 times and i’m still trying to figure out what the fuck that thing is,”asks a confused Lynkzify.

“That is an Ewok..a baby Ewok,” writes Lefty Guns.

“Actually i believe it’s a sub-species of land sharks,” I am Sanic opines.

Emperor of Cartoons chimes in with the most likely correct, although less humourless answer: “A kitten. Looks like a Scottish Fold.”

And, Karen Smith sums it all up perfectly: “this is youtube.”

By the way, happy 10th birthday, YouTube. You are amazing. 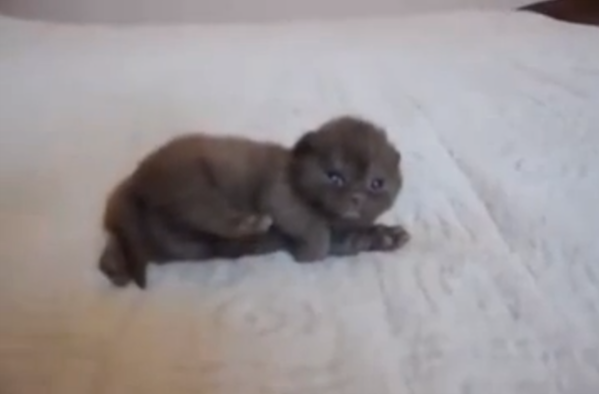