Here’s how the third and final U.S. presidential went down tonight, according to Crusoe the Celebrity Dachshund.

“There are no winners here… only wieners,” the dachshund posted tonight on YouTube, while playing the role of a both a mop-haired Donald Trump and a pant-suit wearing Hillary Clinton.

One thing is clear, the debate will leave voters, whether Democrat or Republican, barking mad. 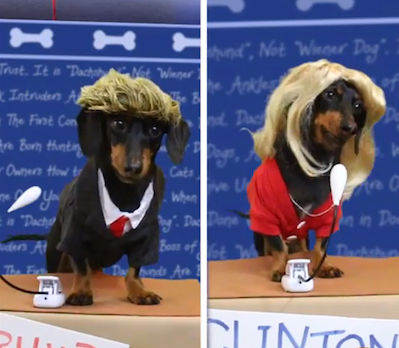 The dog, which has a best-selling book under his collar, certainly has a substantial fan base, including one who thinks Crusoe would make a better candidate than either Trump or Clinton.

But sorry America, Crusoe happens to be Canadian. But the adorable pooch does offers his American neighbors well-wishes.

Because, well, they may well need it.