Pittsburgh Zoo workers were baffled as to how to rescue a stuck ostrich who had fallen through an icy stream when one of the handlers stuck his neck out and jumped in.

Using sticks that looked like giant plastic wishbones, handlers on two sides of the shore around the creek attempted to steer the ostrich off the ice.

The female ostrich, cute and puzzled, kept flapping and couldn’t get its feet out of the water and back on terra firma.

A crowd watched the rescue attempt with parents reassuring concerned youngsters that someone would figure out how to get the ostrich freed. 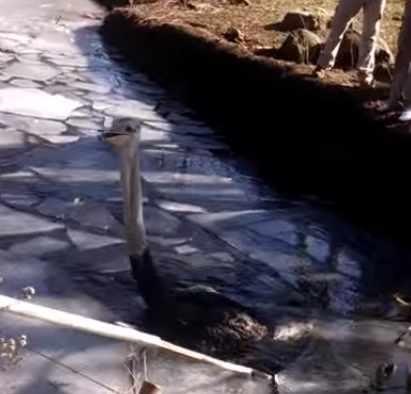 Five zoo workers tried to clear the ice and prod the ostrich out of its stuck position. Finally, one of the handlers, identified as Jesse Anna, jumped into the frigid waters and made his way towards the bird.

Anna walked behind and beside the bird guiding it back to the shoreline.

When the critter was hauled out and made it back to land, onlookers cheered.

The ostrich was dried off and given a blanket to keep her warm. Jesse Anna, presumably, also got a blanket.