Yvonne Machin, a senior who has had her tortoise since she was 14-years-old, watched with horror when two boys leaned over her front garden last week and snatched her beloved pet.

The 82-year-old said she couldn’t run out of her house to stop them. But a heartfelt appeal for the return of Tommy, a pet she’s had for 68 years drew huge support from her community.

Machin ffered a reward of £100 for Tommy’s safe return. A few days later, Tommy was found in a nearby garden.

Tommy is back…We think that the kids got spooked and dumped it next door. Everyone is so relieved that he is home safe.”

Venable said Machin was relieved, exhausted and over the moon but needs some time to recover.

I’ve had her since I was 14. She’s moved and travelled with my family and grown up with my children, She was one of us. She means the world to me. She was just lovely. I would go out in the garden and she would walk across if she saw me coming. And I would sit there and feed her her grapes.”

Describing the moment Tommy was taken from her, Ms Machin said:

“I was sat in my dining room which looks out on to my front garden. The schoolchildren started coming up and these two boys – one with a green jumper on – leaned over my fence. I thought they were just going to look but one of them picked the tortoise up with two hands and left. I couldn’t believe it. I just didn’t know what to do, because I can’t run obviously. I got out there but they had gone.”

Most tortoises can live to between 80 and 150 years – and they are the longest living animal species in the world. 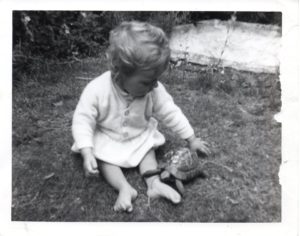