The twin giraffes were the 19th and 20th giraffes born at Natural Bridge Wildlife Ranch, a 450-acre animal preserve recognized in Texas as a top family entertainment attraction. In operation since 1984, the ranch’s successful breeding program spawned the twins’ mother, Carol. Born in 2005, Carol was the 12th giraffe born at the ranch. 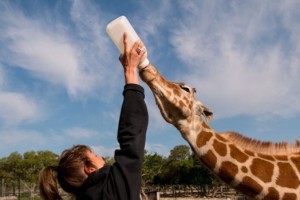 “The twins’ birth was extremely rare. We didn’t have science or history as a guide,” said Tiffany Soechting, Natural Bridge Wildlife Ranch marketing director and animal specialist caring for the newborn giraffes.

“We have taken extremely cautious steps to ensure their health because they have so much to teach the zoological community. Every day we count our blessings that they are thriving.”

The twins have a lot more growing to do. The average Reticulated Giraffe will grow up to 18 feet tall and weigh between 1,800 and 2,600 pounds.

“Nakato—fondly known as Buddy at the ranch–is more personable and assertive. Wasswa, who nursed for 6 months, is shy. Both are playful with each other.”

Nakato was hand-reared since birth to ensure he received adequate nutrition, as animal caretakers and veterinarians had a concern that the mother would not be able to produce enough milk for both offspring. 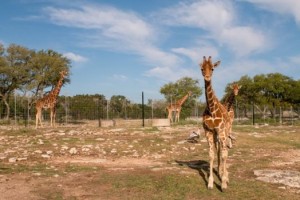 According to Laurie Bingaman Lackey, giraffe studbook keeper for the Association of Zoos and Aquariums, the twin giraffes are the only living set of giraffe twins in the US.

Only nine sets of living twins have been born in zoos of the world. Since the 1830s there have been over 8,000 recorded giraffe births in zoos worldwide; the twins’ birth at Natural Bridge Wildlife Ranch are the 31st recorded set of twins. Three-quarters of twin pregnancies abort early in gestation or are stillborn.

There are eight giraffes residing at Natural Bridge Wildlife Ranch, including the twins’ father Marshall. Marshall is 11-years-old.

The average giraffe gestation is 15 months. Giraffes give birth standing up. Calves fall 6 feet to the ground, and stand up and run within an hour of birth. Giraffe calves are reliant on their mother’s milk for up to 6-12 months, dependable on available forage.

Giraffes are the tallest living land mammals with average height ranging from 16-19 feet.