Vice President Joe Biden was spotted Monday with a bruise on his face, leaving to major speculation.

For those of us who have watched Homeland, the VP’s injury was ripe for conspiracy theories even though the penny-sized mark just below Biden’s lower lip looked minor.

Turns out it wasn’t anything nefarious.

The VP was engaged in a bit of canine rough housing over the weekend. And when he showed up for work Monday at the East Room for an event with President Obama, Biden’s bruise was visible to reporters.

Biden, who bought his German Shepherd puppy from a breeder, faced huge backlash from PETA and other animal rights groups for not choosing a rescue instead when he first brought the dog home back in 2008.

Even the breeder received death threats and increased attention and citations over her kennel leaving her to vow she would never sell her dogs again to a high-profile person (and hopefully not to a low profile bad dog owner either).

Biden’s wife Jill had promised him a dog if Biden and Obama won, just as the president promised his daughters a dog if he got into the White House. 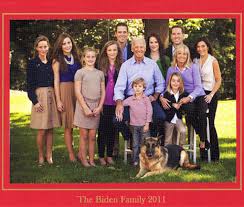