Ring-necked parakeets are apparently such a problem in the suburbs of London, that residents need tips on how to purge the scourge.

The YouTube program AirHeads by Fieldsports Channel.tv recently showed people how to make a parakeet decoy, which pellets to use, when to aim a shotgun and pull the trigger. The host, James Marchington, explains how the species has been added to “general licences” list of “pest birds” and are ripe for picking off. 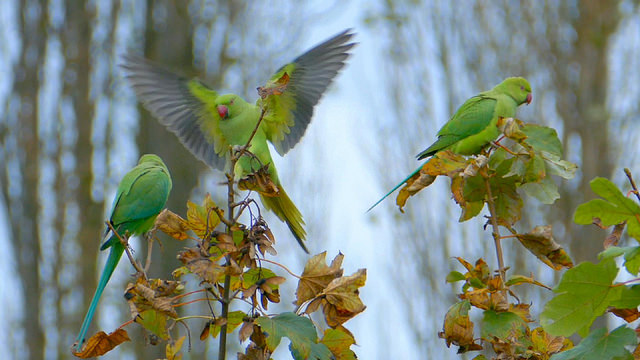 “The flocks of ring-necked parakeets that ravage the fruit farms and vineyards of the South-East if England are at last under threat,” notes the online description of “Decoying Parakeets” posted on YouTube. “Now they are in the telescopic sights of pest controllers, including the owner of The Bird Table Of Doom himself, James Marchington.” 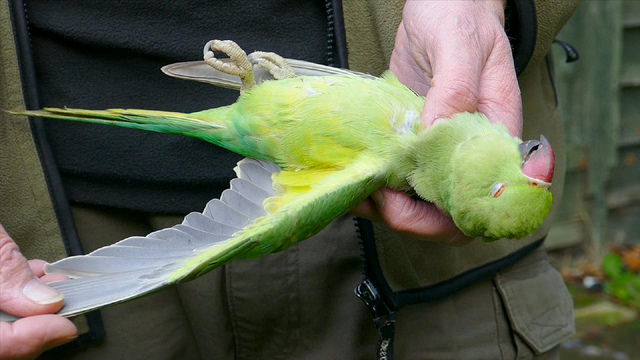 “My plan had worked, although I’ll have to wait and see if that stops the parakeets from damaging the fruit trees,” Marchington tells the camera.

“Remember that although these parakeets are an invasion non-native speices, you can’t just shoot them Willy Nilly,” he adds. “So, if you’re planning to try this at home , do check out the terms of the general license first to make sure you’re legal.”

Here’s the video that sparked the outrage.

Of course, the video ruffled the feathers of animal lovers

“You are pure filth!” Jeanette Burns posted in a comment to YouTube. “You are just killing for the sake of killing. People like you make no sense to me. What are you going to do next when tiny animals no longer feed in to your sick perversion?”

The animal rights group, PETA, described the video as “deranged” in an interview with the London Evening Standard. Even a spokesman the Royal Society for the Protection of Birds told the newspaper the video glorified hunting.

The show’s producers shot back with another video titled “Parakeets II – this time it’s personal” mocking the “antis, the furries and the fluffies” and of course, “the nutters.”

“Our airgun programme AirHeads has been romping through the newspapers this week after we suggested that the legal culling of parakeets was a good idea. Natural England and the RSPB have been using words like ‘deranged’ and ‘shameful’, which is nice to hear from a government body,” the program notes on YouTube. “In this week’s AirHeads, James Marchington gives his parakeet update, and has more tales from The Bird Table of Doom.”

In which, Marchington shoots a couple of squirrels.