This short two-minute video was posted by the YMCA of the Rockies and billed as a video that will undoubtedly brighten your day.

It’s a Disney movie come to life with a deer and a rabbit cavorting in the park as if they were animated characters.

Both seem a bit tentative at first but when they got closer and both discovered they can bounce, that’s when the fun begins. 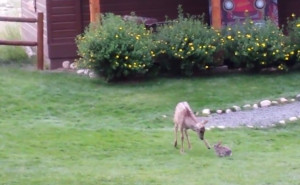 The video was shot at the Estes Park Center and taken by Steve and Vicky Johnsen, volunteers at the park who captured the adorable moment.

And they shot the video horizontally so the viewers get the full frame shot rather than the annoying vertical black stripes you usually see. 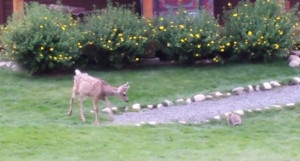 Almost a million viewers have already seen it.

At one point, someone asks: He’s not scaring it is he? And the answer is no, the two critters were nose to nose and kept coming back to play with each other over and over again.