It’s a bizarre case of wildlife abandonment that has Banff wardens baffled.

Parks Canada said officials got the odd-ball report a week ago when a traveller happened upon the cubs when nature called.  (Officials only made the situation public now.)

“On April 1, dispatch received a call of 3 young of year black bear cubs trapped inside the Vermilion Lakes pullout washrooms located on the Trans-Canada Highway, west of Banff,” Parks wrote in an update on Facebook. “There was no mother bear on site or in the adjacent area Parks Canada Wardens have opened an investigation to determine how they became trapped.”

Since there mother was no where to be found – dead or alive – speculation of course is running wild.

A poorly-conceived April Fools Day joke. Someone trying to protect the cubs from being hit on the highway. It’s certainly tough to imagine the bears got in there themselves.

The cubs, weighing just 4- to 6-pounds each and helpless without their mother, couldn’t possibly have wrenched the door handle down, pulled the door open and scurried in before the door automatically shut behind them. 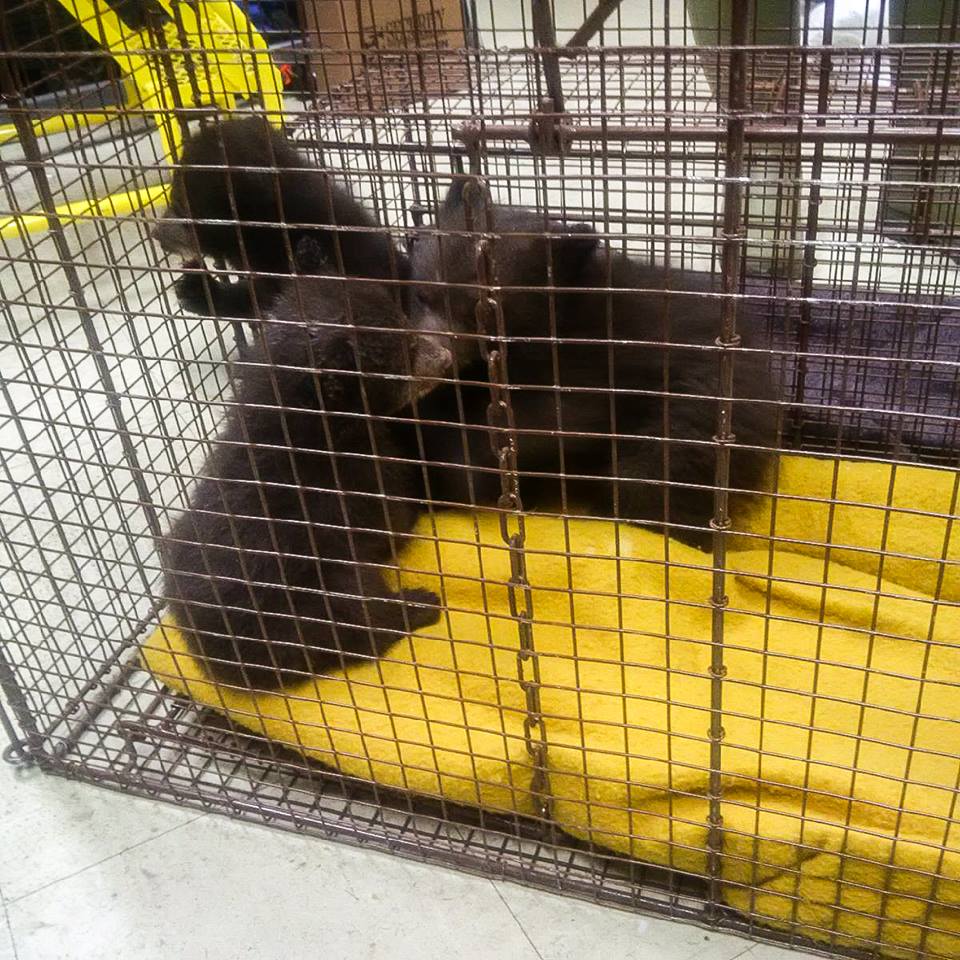 But now, what to do with the cubs?

According to CTV Calgary, the Cochrane Ecological Institute, which is just outside Calgary, has offered to take the cubs. But it can’t rehabilitate the animals unless the federal Parks department jumps through hoops of applying under provincial law for a permit.

And, the Northern Lights Wildlife Society in Smithers, British Columbia, which has a long history of taking in — and then releasing bears back to the wild — was contacted by Parks soon after the cubs were found.

“They did and contacted us on Sunday,” the society posted on Facebook, “but BC policy will not allow us to rehab Alberta cubs.”

So now, Parks is trying to keep human contact to a minimum as the bears are bottle-fed and cared for.

“Parks Canada is casting a wide net and exploring all options to find a home for the bears. We are looking for rehab facilities that are reputable, have space, expertise, experience and success in this sort of situation, and of course a licence for bears. Our priority is to find the best option for the bears and we will explore all possible avenues.”

Of course, they also want to find the person who put the bears in the roadside washroom.

There’s still no word on how the cubs ended up in the restroom or where they’ll end up, but the bears are doing well.

“The cubs are active and appear healthy One cub has even made the transition from being bottle fed to eating more solid food. Parks Canada is in active discussions to re-home the animals and hopes to have a confirmed location soon. To be clear, no final location has been identified yet,” Parks Canada said.

Parks Canada announced late Friday that the cubs will be flown to rehabilitation facility in Ontario where they will be tended to for a year before being returned to Banff for release into the wild.

The Aspen Valley Wildlife Sanctuary has 460 acres in Rosseau, where it has been rehabilitating animals, including bears and wolves, for more than 40 years. it takes in around 500 animals each year and cares for about a dozen permanent residents.

“We took the necessary time to find the most appropriate location to relocate the cubs. Parks Canada found a rehabilitation facility that is reputable, has sufficient space, expertise, and a track record of success with this sort of situation. Parks Canada plans to return the bears back to the mountain park landscape after rehabilitation.”

Wardens said the cubs are health and human contact and handling was kept to a minimum.

There’s still no update on how the cubs got into the washroom or who might have been responsible for putting them in there.

But the folks at Aspen Valley are excited to welcome the cubs, posting this to their Facebook page tonight:

“Three tiny orphaned Black Bear cubs that were found in a roadside washroom in Banff National Park have been caught in red tape limbo for the past two weeks, while Parks Canada staff cared for them and looked for a facility with the expertise and space to raise them for release back into the wild.

Various regulations prevented the tiny trio from being rehabbed in Alberta or BC. Aspen Valley Wildlife Sanctuary offered to help, and was eventually able to obtain a permit from the Ontario government to fly the cubs here, care for them for the next year, and then return them to Banff National Park, for release.

We are very grateful to the staff of Banff National Park for the compassion and perseverance they demonstrated, on behalf of the cubs!”