Sometimes there are sights that can move you more than just words.

Recently we heard that by 2020, the world will lose two-thirds of wild animals. That’s just a little more than three years from now.

The report, from WWF’s Living Planet, found that global biodiversity is declining at an alarming rate, putting the survival of species and human’s own future at risk.

The Living Planet Index reveals that global populations of fish, birds, mammals, amphibians and reptiles declined by 58 per cent between 1970 and 2012, according to the report.

We could witness a two-thirds decline in the half-century from 1970 to 2020 – unless we act now to reform our food and energy systems and meet global commitments on addressing climate change, protecting biodiversity and supporting sustainable development.

The analysis, the most comprehensive to date, indicates that animal populations plummeted by 58% between 1970 and 2012, with losses on track to reach 67% by 2020. Researchers from WWF and the Zoological Society of London compiled the list. 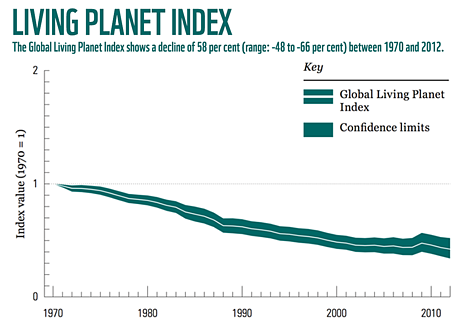 There’s also this video out now of rare and moving footage of six extinct animals taken before being wiped out.

It also features an eye watering list of every animal and plant that has gone extinct since 1900.

Heath hens in courtship rituals at the island of Martha’s Vineyard in 1926 or 1927. This is the only known surviving footage of the heath hen. The film was made seven years before the bird went extinct due to mass hunting.

The thylacine was the largest known carnivorous marsupial, also known as the Tasmanian tiger or the Tasmanian wolf. It was native to Australia, Tasmania and New Guinea. It became extinct due to hunting, disease, dogs and habitat loss.

The Laysan crake was a flightless bird from the Hawaiian Islands. It was wiped out in 1944 by habitat loss and war.

The golden toad was last sighted in 1989 in Costa Rica, and is now believed to be extinct. This toad displays extreme sexual dimorphism – large size and appearance differences between the sexes. It died out due to habitat loss and a fungus disease.

The Baiji Dolphin’s extinction is somewhat in dispute. A film taken in 2007 was tentatively verified as showing the Baiji Dolphin, however, it has not been seen since and has been declared functionally extinct. It vanished due to overfishing.

The Western Black Rhino was found mostly in Cameroon, Africa, and was believed to be genetically different to other subspecies. During the 1900s it was the most common species of rhino. It was wiped out do to poaching.