The Hadron Collider was shut down this week after a weasel snuck into the world’s most powerful atom smasher and chewed through some wires.

The report from the CERN in Switzerland reported that it wasn’t the best week for the machine.

Turns out a short circuit was caused by a fouine, which Wikipedia identifies as astone marten ( Martes foina) is a species of mammalian carnivores of Europe and Asia. It”s also known as a weasel or a badger.

The atom smasher was used to prove the existence of the Higgs Boson – also known as the God particle, according to the European news outlet.

“Not the best week for LHC!”

In an internal incident report, the European Organization for Nuclear Research (CERN), which runs the 17-mile circuit under the Swiss-French border, said it was “not the best week for LHC!”

The shutdown occurred around 5:30 pm last Friday when the small beech marten found its way onto a large, open-air electrical transformer situated above ground at CERN.

The chewing causing a short circuit which cut the power to part of the Large Hadron Collider (LHC).

The concerned part of the LHC stopped immediately and safely. Since then the entire machine has remained in standby mode.

When the little animal jumped onto the transformer, it created a small electrical arc, damaging high-voltage transformer connections.

Many of CERN’s sites are located in the countryside and similar events have happened a few times in the past. They are part of life of such an accelerator, as with any large industrial installation.

A team assessed the situation over the weekend and found no indication of damage inside the transformer.

Repairs to the connections are hoped to be completed by the end of the week, as the LHC continues to prepare for the 2016 physics run. 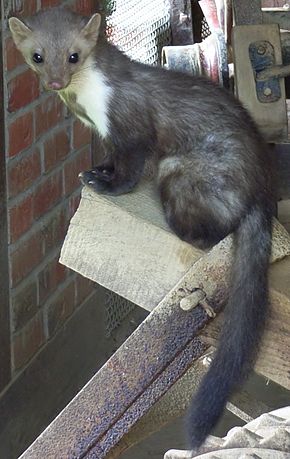 CERN spokesman Arnaud Marsollier told AFP that the most serious damage was sustained by the weasel, which did not survive its solo expedition into the frontiers of particle physics.

As for the LHC, Marsollier said

Some connections were slightly damaged and we are at work to repair (them).”

He said the repairs should only take a few days.

CERN is operated by the European Organization for Nuclear Research, physicists and engineers and its job is to probe the fundamental structure of the universe.

Discoveries through basic constituents of matter

They use the world’s largest and most complex scientific instruments to study the basic constituents of matter – the fundamental particles. The particles are made to collide together at close to the speed of light.

The instruments used at CERN are purpose-built particle accelerators and detectors. Accelerators boost beams of particles to high energies before the beams are made to collide with each other or with stationary targets. Detectors observe and record the results of these collisions.

The process gives the physicists clues about how the particles interact, and provides insights into the fundamental laws of nature.

One fundamental law, it would appear, is weasels should not collide with colliders.