Let this be a lesson in reaching for the stars.

Sometimes, it just isn’t worth it.

The ground is stable and secure. Sure, trees and branches are interesting in their own way.

But staying on terra firma is a pretty good, zen place to hang out.

In his second venture outside, baby panda bear Bei Bei tried some tree climbing watched over carefully by his mama Mei Xiang. 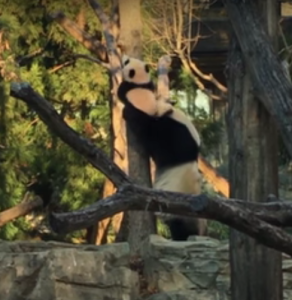 As Bei Bei inched higher up, Mei Xiang appeared to want to pull him back to safe ground.

The David M. Rubenstein Family Giant Panda Habitat at the National Zoo will reopen to the public when the cub is about four months old, though the exact timing will depend on Mei Xiang and the cub. Bei Bei, and his older twin brother, were born in August last year. Sadly the brother didn’t survive, but by all accounts, Bei Bei is thriving.