The devastating Notre-Dame fire last week that toppled its famous spire and destroyed much of the cathedral’s roof has spared the lives of hundreds of thousands of the tiniest residents who live atop the landmark church.

About 200,000 bees living in hives on the roof were initially feared killed in the fire. But the cathedral’s beekeeper, Nicolas Géant, found the bees are alive.

The cathedral has had three beehives on the roof since 2013, part of a country-wide plan to increase the number of bees.

The hives sit on top of the sacristy by Notre-Dame’s south side, around 30m (98 ft) below the main roof.

European bees – unlike other species – stay by their hive after sensing danger, gorging on honey and working to protect their queen.

High temperatures would have posed the biggest risk, but Géant told AP that any smoke would have simply intoxicated them.

Instead of killing them, the carbon dioxide makes them drunk, puts them to sleep.”

Smoke is commonly used to to sedate the insects and gain access to their hive. While millions of people around the world watched the fire, the bees, it would appear, simply went to sleep. 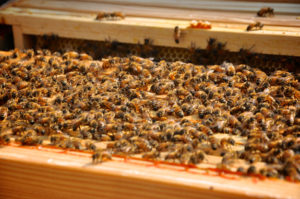 Our Lady of Paris, by hosting this hive, is fully associated with the preservation of dynamic biodiversity and thus wishes to recall the beauty of creation and the responsibility of man towards her.

This hive was donated by Nicolas Géant, beekeeper, which already has many beehives on the rooftops of Paris.

The bees in this hive are Brother Adam, known for their softness.

Their role is indispensable in nature. The presence of bees is a sign of good health of our environment and their preservation is also saving the planet, according to the website at the cathedral.

There are also religious reasons why bees are important:

Saint John Chrysostom and the bee, inspirational for the Christian

Saint John Chrysostom, in one of his homilies to the people of Antioch, evokes the work of Divine Providence as admirable in the creation of the smallest insects as in the firmament:

Carry your eyes on the bee. Unabated, she works for the service of man as much as for her own use; This is the image of the Christian: he seeks less his interests than those of others. You see her browsing the meadow to pick up the loot that will enrich a foreign table. Imitate his example, o man! Whoever you are; rich, to spread, in the bosom of the poor, the treasures of your opulence; scientist, to produce out your knowledge and distribute them in the community. What makes the bee’s glory is not to be laborious, it is to be for the public good. 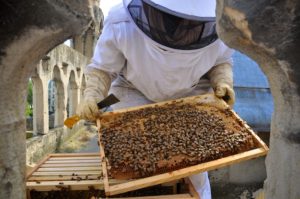 According to the Life of Ambroise written by Paulin of Milan, his Secretary, his cradle was in the courtroom. One day he slept there, a swarm of bees suddenly came and covered his face and his mouth so that it seemed that the insects were entering his mouth and leaving. The bees then took their flight and rose in the air at such a height that the human eye was no longer able to distinguish them. The event struck his father who said,

“If this little child lives, it will be something great.”