With a whoosh-whoosh, the kererū has swooped to glory for the first time, in Forest & Bird’s annual Bird of the Year competition.

Amassing a total 5833 votes, the kererū, kūkūpa, or wood pigeon, as it is variously known, whooshed ahead early and managed to maintain a formidable lead to the finish despite strong challenges from the kākāpō and the kakī.

The wood pigeon’s successful 2018 Bird of the Year campaign was led by a team of digital natives, including Green Party MP Chlöe Swarbrick. Their campaign focused on the bird’s size and appetite, kicking off a meme war over which native bird is the roundest.

“New Zealanders have voted overwhelmingly for change and the kererū pledges to honour this groundswell of popular opinion and govern for the many. Team kererū would like to thank the voting public for their support. It has been a long and arduous campaign and we couldn’t have done without their support. We’d also like to thank Forest & Bird for running Bird of the Year, raising awareness for the plight of our native birds, and for their ongoing conservation work, and all the other campaign teams whose memes obviously weren’t as dank – until next year.” says Team Kererū co-campaigner Tim Onnes.

While the kererū population is classed as stable overall, it is in danger of becoming locally extinct in some areas where there has not been sustained predator control. The fate of many forests is linked to that of the kererū, as it’s the only native bird big enough to swallow and disperse the large fruit of karaka, miro, tawa and taraire.

Bird of the Year is run by conservation organisation Forest & Bird to raise awareness of New Zealand’s unique native birds and the threats they face.

The organization does a bang-up job building up suspense in the weeks leading up to the unveiling.

Did you know that weka poop their body weight in a day? Be warned — it’s very smelly and stains the carpet forever. Never corner a weka inside… https://t.co/7q9W4ltcGt #BirdOfTheYear @voteweka pic.twitter.com/XCPQAgNX40

This year’s Bird of the Year competition prompted celebrity endorsements from Stephen Fry for the kākāpō, and from comedian Bill Bailey for the takahē.

Bird of the Year also featured on Tinder for the first time, with Shelly the kakī, or black stilt, attracting 500 matches across New Zealand.

There was attempted international election fowl-play when IP addresses in Australia sent through over 300 votes for the shag, and then over 1500 for the kakī. However, these attempts were thwarted by Forest & Bird’s hawk-eyed election scrutineer at Dragonfly Data Science. 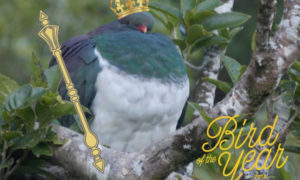 The competition also showed that it transcends the generation divide, with pupils from Bethlehem School making a video in te reo Māori supporting the kakaruia, black robin, while a postal vote was submitted by an octogenarian who didn’t have a computer to vote online.

This year was the competition’s most popular yet. It attracted over 48,000 votes, up from 41,000 in 2017. Once again, Bird of the Year attracted worldwide coverage, with the competition featuring on The Guardian, CNN, and the Australian Daily Mail, among others.

Bird of the Year 2018 was supported certified B-Corp footwear company, Allbirds, who created a custom Wool and Tree Runner collection inspired by last year’s winner, the kea, with proceeds from the shoes going to Forest & Bird.

The competition was also supported by Heritage Expeditions, who raised funds to help Forest & Bird protect and restore New Zealand’s native birds and their homes.