On February 21, 2016, a concerned person reported to IFAW’s marine mammal rescue hotline a live juvenile harp seal on Kingsbury Beach in Eastham. An IFAW volunteer responder was dispatched to assess the situation and update IFAW staff. The seal was alert and responsive, and the volunteer posted signs to notify the public that there was a seal resting in the area and to keep their distance.

When the volunteer checked back later that day, the beach had become quite busy and the seal was getting closely approached by people. The seal was very aware of all the people around and was showing signs of stress. IFAW staff and interns arrived on scene later that afternoon to further assess the seal and talk with the public about responsible wildlife viewing. 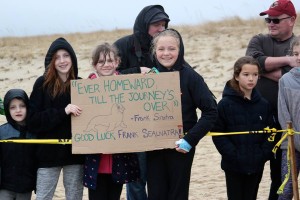 Since he appeared very alert and the human beach traffic had died down, the team decided to leave him to rest for the night and check back in the morning to see how he was doing. In the morning, we noticed his responsiveness had declined and he did not seem to be doing very well.

He was in need of medical care. 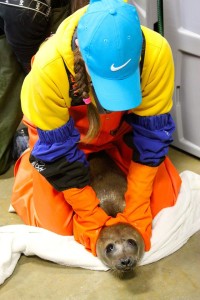 He was collected and brought to our partner in Buzzards Bay, Massachusetts, the National Marine Life Center, where he was given the name Frank “Sealnatra.” Frank was suffering from dehydration, respiratory distress and a parasitic infection. These issues are relatively common and usually treatable in harp seals.

After about one month of receiving care and medical treatments and putting on weight, Frank improved enough to be released at Scusset Beach in nearby Sandwich on March 25, 2016.

There to send him off were the person who reported him, the IFAW volunteer who helped monitor him, and the three IFAW interns who collected him, along with NMLC personnel and many other well-wishers. 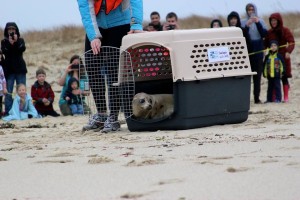 After pausing to roll in the warm sand, Frank went quickly into the frigid water and swam straight out into the ocean! 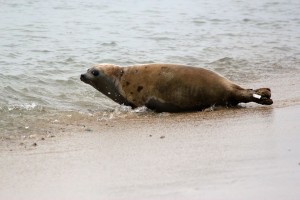