Remember the story about the chained elephant Raju who reportedly wept tears of joy after being freed following 50 years in chains?

Watch the moment on the video below when mountain lion Musafa is cut free from his chains.

There is hesitation at first as he gets up from his position. The circus owner who had Musafa kept him chained in the back of a pick up truck.

Musafa has the distinction of being the last wild animal in a Peruvian circus where he’s been forced to perform for 20 years.

After Peru banned wild animals in circuses, most circuses defied the law. One by one Animal Defenders International tracked the circuses down and removed the animals.

Mufasa’s journey to freedom began in April, when ADI received a tip-off that Circo Koreander was illegally operating with wild animals in an isolated village in northern Peru.

ADI, police and wildlife officers moved in for a surprise raid but were met by hostile resistance.

An eight hour stand-off saw riot police and a public prosecutor called in before Mufasa – Peru’s last wild animal in a circus – was handed over, along with a condor.

Musafa was cut from his circus chains and taken to ADI’s Spirit of Freedom rescue centre near Lima to rehabilitate. His appetite and coat condition have improved after receiving specialist veterinary treatment.

It is believed that Musafa was taken from the wild as a baby. 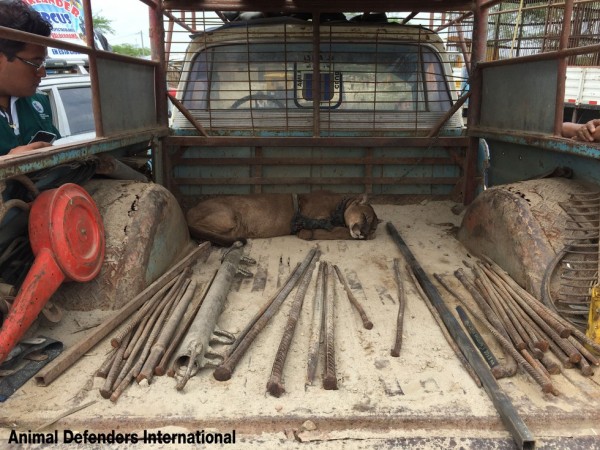 After being nursed back to better health, Musafa made a 3-day journey by road and boat to his forever home on the edge of the Tambopata reserve in the Amazon rainforest.

During the mission, ADI has provided complete logistical support to Peruvian officials to enforce the wild animal circus ban and tackle the illegal wildlife trade.

Nearly 100 animals have been rescued, with most relocated to ADI funded habitats in the Amazon. The mission will conclude with the world’s biggest airlift taking 33 lions to a new life at Emoya Big Cat Sanctuary in South Africa.

Here’s where you can go for help to give Musafa the life the circus stole from him: Animal Defenders International. They do amazing work!