Ricochet began life destined to become a service dog, but somehow along the way the golden retriever discovered birds and the focus was gone.

So Ricochet, a six-year-old therapy dog is now a surf dog who helps kids from disadvantaged backgrounds, disabled kids and bullied one and veterans with disabilities and PTSD. Ricochet “paws it forward” by being with them on surf boards as tey take to the water. 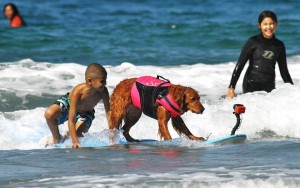 He is, as owner Judy Fridono says, the only SURFice dog on the planet, a title that’s now been copyrighted. Over the years, the dog has raised almost $400,000 for human and animal causes.

I promote kindness & treat everyone with love, respect, consideration, gentleness & grace. I’m an advocate for social responsibility, anti-bullying, equality and being true to yourself. I support, educate, empower & inspire kids who get bullied, feel isolated, mis-understood or confused. Tragically, many kids who bully are also mean and cruel to animals. So, I try reach kids before they mature into bullies, teaching them how to respect animals. I don’t work in rescue, but support those who do with my other page dedicated to rescues & animals in need