It’s not every day you see critters break free and make a run for it.

Oh wait, it happened just recently in Phoenix when some llamas made a hilarious dash for freedom as hapless llama capturers failed to nab them. And let’s not forget the time Andy Murray rescued a runaway dog on his way to a tennis match

Okay, yeah, I guess it’s fairly common. But zebras on the loose in Brussels? That’s gotta be a first. A quick Google search reveals zebras have run amok before.

In 2011, two zebras escaped from the Leesburg Zoo in Virginia after an employees reportedly left their cage open. 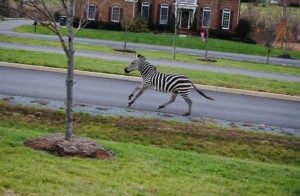 They were later captured by the sheriff’s office and hit with tranquiliser darts before being returned to their enclosure.

The three zebras escaped from a ranch in Kingslo, near Vilvoorde in Belgium and made their way to the capital of Brussels giving anyone looking out their window at just the right time, the sight of galloping zebras.

The Belgium zebras were also later captured and returned to the zoo.