This video is remarkable for how steady and quiet the cameraman is.

Drew Hamilton, who works for Alaska Department of Fish and Game, shot the video last year while camping at the McNeil River State Game Sanctuary and Refuge.

He was watching other bears fish in the river below when a huge Alaskan brown bear walks up to his campsite and sat down right next to him. 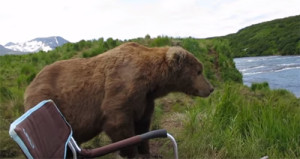 A brown bear at McNeil River sits next to a group of bear viewers as he checks out the river below.

McNeil River is home to the largest season congregation of brown bears on earth. When observing large groups of bears proximity comes with the territory.

For 40 years people have been visiting this same spot, behaving in a consistent, predictable, manner. As a result the bears can go about the business of being bears without having to worry about human interference.