When the Okefenokee National Wildlife of Folkstone, Georgia posted the question, they got a ton of really thoughtful and smart responses on Facebook including this one:

Nile Charles Beyond the basic aesthetic differences y’all have pointed out there are many other physical and environmental distinctions to be made as well. Crocs like salt water so the closest one you will find will be down south in the Everglades. They can open and close their mouths with equal amounts of pressure whereas gators can snap with over 3000psi but you can hold their mouths closed with a mere five pounds of pressure(two fingers should do it). Crocs can jump out of the water one and a half times their body length out of the water so a ten foot croc can reach up to around fifteen feet out of the water if it’s got room to get up to speed. Also crocs are much more aggressive than gators and I have a few personal anecdotes to prove it, including one where a cricket stands on its two hind legs and runs at my kayak tearing down mangrove trees with its little arms along the way. I have no qualms with swimming or diving with alligators (or sharks for that matter) but crocodiles have always intimidated me. Also I was told to beware of irony as a child and I figure being named ‘Nile’ I would just be asking for it. Still, I’d swim up and down that canal to look for your lost camera or car keys and inevitably come up with some old bottles from the Hebard cypress logging company along the way. Still though, Fargo and the west side are where my heart truly reside. There and these north Florida springs y’all Georgians tend to overlook.

Here’s how you can tell the difference:

This is a Siamese Crocodile. It has a pointed snout and in crocodiles the upper jaw and lower jaw are approximately the same width, and so teeth in the lower jaw fit along the margin of the upper jaw when the mouth is closed. Most people regard them, according to the Crocodilian Biology Database as more aggressive than alligators.

Hmm, to our untrained eye. They look a lot alike.

The Crocodilian Database which is a great resource has also posted a more helpful diagram. A is for Alligator. B is for Crocodile. 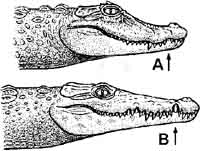 Their forum is also a big resource for people who have questions.

One of the forum users posted this week on whether her alligator is coughing or trying to speak or bellowing out a mating call? No answers yet.

Anyone ever heard an alligator cough?

We have a very runty alligator who is only 3 feet ing and yet 9 years old. She is healthy despite her stunted size, but in the past couple of weeks I’ve heard what sounds to me like a wheezy/whistle-like cough…I can try to get a recording of it.

To me it sounds exactly like the sound made when they tighten the lug nuts on your wheel at the auto shop…a kind of “Zhheeeew!” …In fact, so much so that I thought the noise was coming from the shop where my husband was reorganizing the garage and not the alligator.

She does this mostly when it is dark. Maybe 3-6 times an hour. It is not the same as her chirpy baby sounds, or a growl/hiss…I’ve heard those. This is different.

My husband thinks she is calling for a mate or other gators. But I’m reluctant to think so because she is small, and unless she were of breeding size I can’t imagine why she would wish to draw that kind of attention to herself.

I’ve not noticed any discharge from her nostrils. Her appetite is stellar.

Then again, maybe we’ll see you in a while.