How did this trend get started?

A popular video on Youtube has received more than 2 million views in the last few days after someone posted a compilation of videos of cats scared by cucumbers.

Usually it involves the cat turning around and noticing a cucumber from behind. 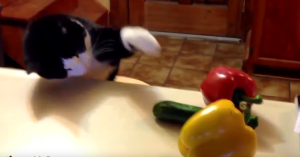 The cucumber doesn’t actually do anything to the cat. But viewers commenting on Youtube speculate it could be that the cucumber reminds cats of snakes.

It could also be the colour that freaks cats out.

But seeing a cucumber makes some cats leap into the air or back away fearfully. 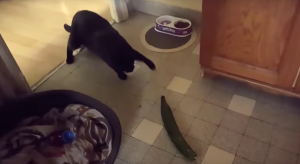 National Geographic has now weighed in on the viral trend quoting an expert about why it may be happening and what it says about humans more than cats.

“If you cause stress to an animal that’s probably not a good thing,” says Jill Goldman, a certified animal behaviorist in southern California. “If you do it for laughs it makes me question your humanity.