Tennis hero Andy Murray is also, it turns out, a hero to runaway dogs.

The Wimbledon champ was on his way to practice when he saw a dog running along the road.

So he parked the car at the traffic light and tried to stop the traffic.

The dog was running towards the oncoming traffic,” Murray told BBC Sport. “So I ran in front of the road and stopped traffic.”

Murray said the labradoodle was very strong and obviously didn’t want him to grab it by the collar and put it in the back of his car.

I drove to the place where people walk their dogs, drove there, parked and called the number of the tag.” 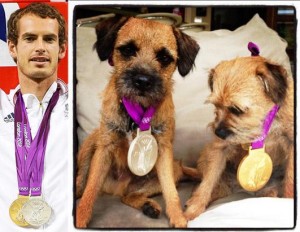 It turns out that while Murray didn’t know the dog, the dog knew his dogs. Murray’s dogwalker, who walks his two border terriers Maggie May and Rusty also walked the runaway dog.

When I met the owner she said, ‘we know your dogs.’

He noted that a number of people probably noticed him trying to grab the runaway dog.

Quite what anybody in the passing cars made of it all, I’ve no idea!”

Murray has said in the past that Maggie May and Rusty are big reasons why he loves going home when he’s not on the tour circuit. After winning medals at the London 2012 Games, the two dogs posed proudly with Murray’s hardware.