The United Nations designates June 8 as World Oceans Day and the U.S. Coast Guard is marking the occasion by showcasing some of the rescues they’ve recently undertaken on the ocean as part of the organization’s mandate to protect not only those on the sea, but the sea itself.

The Coast Guard remains the primary agency for the at-sea enforcement of all U.S. laws and obligations for the conservation of living marine resources.

Both the living marine resources and the marine environmental protection missions of the Coast Guard serve to protect the maritime environment and ensure the safety of life in the depths, at the sea’s surface and in some cases in the skies above.

Since the early 1820s when the Revenue Cutter Service was first tasked with protecting federal stocks of live oak trees, the service has expanded it’s role to safeguarding marine habitats, mammals and endangered species.

Coast Guard crews recently worked alongside the National Oceanic and Atmospheric Administration to transport an injured Hawaiian monk seal from Kauai, Hawaii, to Oahu. The Hawaiian monk seal is one of the most endangered marine mammals in the world and, according to the National Oceanic and Atmospheric Administration, their population is declining.

Residents and visitors to Hawaii may be familiar with the plight of the monk seal. In this case, a seal was found to have swallowed a fish hook and in needed medical attention. The Coast Guard was able to successfully transport the injured monk seal to experts that provided the necessary treatment and rehabilitation. 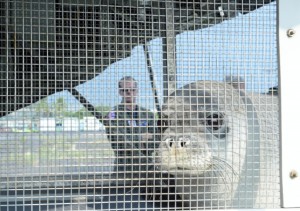 The Hawaiian monk seal is one of the rarest marine mammals in the world with an estimated population of less than 1,100.

While underway recently, Coast Guard Cutter Thetis encountered a large mass of what appeared to be ‘sea junk’ – a collection of plastic jugs entwined with fishing nets and other debris. However, upon a closer look, the crew discovered a debilitated sea turtle tangled in the material and immediately launched a small boat to assist. 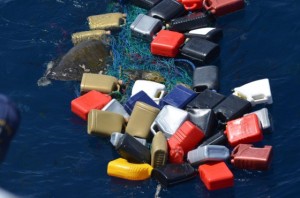 In this case, the commanding officer’s decision to intervene proved to be key, and the cutter’s small boat crew was able to free the turtle from the debris and allow it to swim free.

While the general public is not permitted to handle sea turtles, the Coast Guard has special authority under the Endangered Species Act.

The act authorizes “designated agents and employees of specified Federal and state agencies” to render aid to “endangered sea turtles, in the marine environment, that are alive but sick, injured, or entangled.”

Here’s a video of the rescue of the turtle.