He was known as Elvin, the main butcher and pig abuser on a Miami area farm and his illegal animal slaughter operation was documented with surveillance footage by the animal rights groups Animal Recovery Mission.

ARM investigators became suspicious that an illegal animal slaughter house was operating at the location back in 2013.

As a result, ARM undertook a series of undercover operations and began documenting evidence of extreme animal cruelty.

The footage taken via hidden cameras mounted upon ARM operatives, confirmed that illegal activities and inhumane practices upon animals were occurring on a regular basis.

The investigation led to the closure of the illegal animal slaughter farm which killed countless pigs purchased for human consumption by the Latin community during the holiday season.

The holiday is known as ‘Noche Buena’- hence the name of the investigation.

ARM’s undercover investigations began on December 24, 2013 when investigators entered the targeted property. Illegal and inhumane handling, butchering and sale of animals for human consumption were documented. 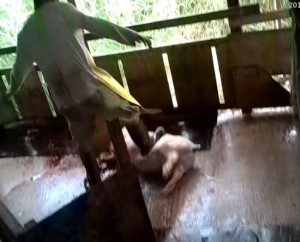 During both undercover investigations, ARM operatives witnessed pigs being killed with blows to the head by large mallets and by firearms. Investigators also documented animals being dragged by their own body weight with meat hooks inserted through their jaws, stabbed in the heart and boiled, all while still conscious and alive.

In addition, animals were handled in an excessively rough manner, thrown through the air, kicked, tormented and tortured prior to being butchered.

Furthermore, it was clear that many of the animals were gravely ill and not fit for human consumption, yet sold for that purpose regardless.

On both occasions ARM documented offenders who were heavily under the influence of alcohol and/or drugs and were actively drinking beer while torturing and butchering animals. They were also operating firearms, at times in the presence of young children. 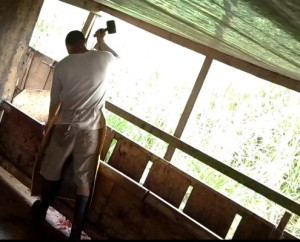 None of the animals at this location were provided with adequate shelter, medicine, food or water.
  
 Following ARM’s independent investigations, the evidence was presented to the Miami-Dade’s State Attorney’s office and local law enforcement.

Two men were arrested. Raul ‘Freaky’ Fernandez (aged 53) and Yoinsley ‘ Pipe’ Garcia (aged 31) are now facing seven counts of animal cruelty as well as the illegal operation of a business.

Fernandez, who at the time of his arrest was already on probation for drug trafficking and other crimes committed in both 2011 and 2013, had a $175,000 bond for the animal cruelty, third degree felony charges.

Garcia, who “was observed causing bodily harm to animals in a malicious and torturous manner,” according to a Miami-Dade police arrest report, was granted a $35,500 bond and remains under house arrest.

Both Fernandez and Garcia are currently awaiting their final sentences and several other offenders are also being sought, including the main butcher Hervis-Gonzalez,

After an extensive manhunt, Hervis-Gonzalez was finally captured last month.

At the time of his arrest by the Miami Dade Police Department and the Miami Dade State Attorney’s office, Hervis-Gonzalez ‘Elvin’, was attempting to sell a stolen vehicle to fund his flee to Texas to avoid being captured. He was considered America’s most wanted animal killer.

A notorious and violent animal killer, Elvin’ was also found after his arrest to have a long rap sheet including animal fighting, the killing of horses for the black market horse meat trade, grand theft auto and domestic violence.

Currently, Hervis-Gonzalez faces 30 counts of animal cruelty alone and his bail stands at $75,000 due to his flight risk.

We’ll keep you updated on this file.