This was one very bad day at the National Zoo in Washington, D.C.

On Monday, a zebra repeatedly bit one of its zookeeper, an attack witnessed by a gazelle that was so “spooked” by the incident, it seemingly ran into a fence fracturing its vertebrae so badly, it died, according to the zoo.  A 1-year-old male Dama gazelle named Tony was found dead inside its enclosure, which wasn’t shared with the zebras. 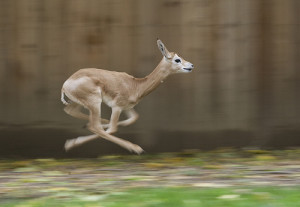 It’s not clear why the 10-year-old male Grevy’s zebra named Gumu attacked the zookeeper, who according to zoo protocols shouldn’t have been in the enclosure with the zebras. Gumu was also apparently disturbed by the incident and kept off display for the day. The unnamed male zookeeper was bleeding, but alert and taken to hospital.