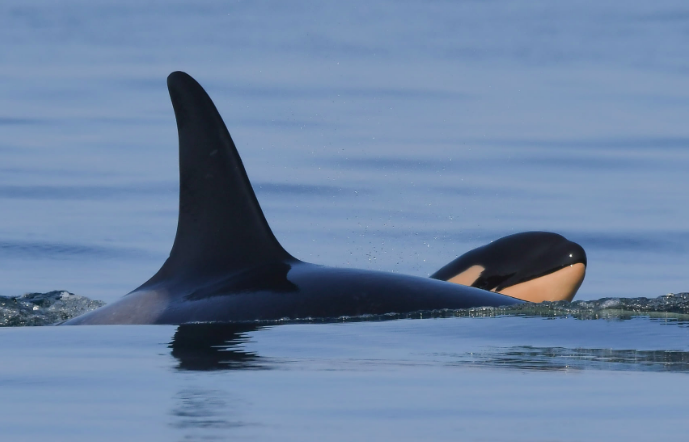 A baby calf born to a killer whale from an endangered pod off Washington State and British Columbia is being greeted with celebration.

J35, also known as Tahlequah, made world news two summers ago when she carried her dead calf on her head for 17 days while the pod travelled around 1,000 miles around the Salish Sea.

Researchers who have been watching the endangered pod termed the heartbreaking sight a “Tour of Grief.”

The small calf is believed to have been born on Sept 4. Tahlequah was capable of producing a live calf after an approximate 18-month gestation.

Her new calf appeared healthy and precocious according to observers from the Center for Whale Research who watched the calf swimming vigorously alongside its mother in its second day of free-swimming life.

The researchers know that the calf was not born on Sept 5 when it was observed because its dorsal fin was upright and it takes a day or two to straight after being being over in the womb. station.

Tahlequah was mostly separate from the other whales and being very evasive as she crossed the border into Canada, so the researchers did not stay too long with her after photographing the new calf.

The small calf was first spotted on Sept 5 by one of the volunteer whale watchers and confirmed by a guest veterinarian.

The news of the calf’s birth was greeted with celebration by many who hope that this whale will overcome the odds. With killer whales being in so much nutritional stress in recent years, a large percentage of pregnancies fail.

About 40 per cent of young calves don’t survive.

With this new calf in J pod, that we designate as J57, the Southern Resident Killer Whale population now numbers 73, although the official number for July 1 is estimated to be 72.